At this year’s AWP Conference in Washington, D.C., I spoke on my first panel.  The panel 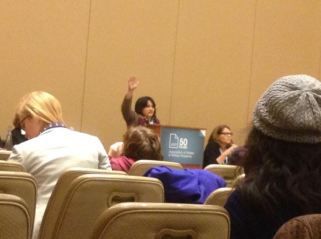 That’s me, hiding behind the podium, speaking with my hands!

was called, “The Politics of Queering Characters,” and was, as the title suggests, about the benefits and drawbacks of creating queer characters on the page (whether that page be fiction, creative nonfiction, poetry or otherwise).

I organized this panel in response to a talk Garth Greenwell, author of What Belongs to You, gave at last year’s AWP.  For those unfamiliar with Greenwell, his latest novel has been hailed the “great gay novel of our time,” and as a queer writer, I was eager to hear him speak.  On the podium, Greenwell talked about his views on being marginalized as a “gay writer” (a place some writers try to avoid as it often is seen as a curse, a label that can keep a writer from becoming more established and well read).  He brought up Aristotle’s idea of the universal, that belief a writer’s our goal should be to tap into a collective consciousness of sorts, where no matter where you live or who you are, if the writer is doing their job, the reader will be moved by a “universal” sense of what it means to be human.

This is something I’ve always aspired towards in my own writing, this sense that all stories, even a queer story (especially a queer story), can be made into a story anyone can relate to, if done correctly.  This idea works with my own sense of idealism, and for years, I’d gone about on this quest quite happily.  But then, Greenwell threw a metaphorical wrench in that system.  He questioned this idea of the universal, wondering who it was made for?  Was it made for people like us?  Or was the universal created out of the artistic aesthetic of a privileged few.  And that aesthetic looks a lot paler, whiter, and straighter than my own.

And so Greenwell argued, why aim for the universal at all?  “I am a queer writer,” he said, “writing queer characters for a queer audience.”  He spoke, quite passionately, about the so-called “gay-ghetto,” claiming by the end that if James Baldwin and Virginia Woolf are in this “gay-ghetto,” then count him in.