It’s that time of the semester again. The students in my fiction-writing class are getting ready to turn in short stories for workshopping, and I’ve had the nerve to give them rules to follow as they write—stuff like writing from the POV of a living human character who’s interacting with other human characters in a contemporary time and in a setting they’re familiar with. Don’t kill off a character in order to resolve a conflict, I say. Don’t write a story that begins or ends with an alarm clock, I say, or one that depends on coincidence or one that ends with the gimmick of “It was all a dream.” Don’t turn in a would-be episode of whatever’s hot on Netflix or at the movies. Don’t, don’t, don’t, I say. Amid all the don’ts, I include the all-important one, so important that it’s underscored on the list of content guidelines on my syllabus. “Genre work is forbidden,” I’ve warned, “and turning it in will result in a grade deduction and possible failure of the assignment.”

Inevitably, this rule makes the light go out of the eyes of about half my fiction students, while the others appear unfazed. The class—an intermediate-level undergraduate fiction workshop—has literary fiction as its focus, I’ve said, so the repetition of the rule should come as no surprise. Even as I hammer home what sorts of things I’m looking for in their stories, I wonder who this semester’s rule-breaker will be. Who will insist on setting a story on another planet or adding a dragon into the mix or having a zombie take a bite out of an expendable character or treating the reader to a day in the pet beta fish’s life from the pet beta fish’s POV? And is there any chance at all that that rule-defying risk-taker will compose a successful story?

My choice isn’t intentionally cruel. My colleague Jack Trujillo greets his fiction classes with a list of “creativity-destroying rules” very similar to mine. What should be obvious is that we’re not trying to destroy creativity; we’re trying to prevent formulaic writing, and in addition, we’re trying to spare ourselves from having to read the kinds of stories we’ve read far too many of, so many of that we long ago had to form these lists of rules. We’re teaching students how to write the sorts of stories most likely to be considered for publication in literary journals or most likely to serve as writing samples for possible entrance into an MFA program. It’s a safe assumption that a good number of our students are interested in pursuing such goals. And yeah, it’s a safe assumption that other students aren’t. But my colleagues and I work in academia, so we teach what’s been deemed literary in academic circles.

When I started teaching fiction-writing workshops, I didn’t have any rules. I didn’t even have a maximum page length. This was more than sixteen years ago, and I quickly noticed my students’ propensity to write reworked episodes of Buffy the Vampire Slayer with the characters’ names changed, or to write science-fiction with oddly named characters and creatures who lived in worlds whose settings weren’t clear or whose societal conventions weren’t established or who had nothing at stake, and of course there was a fair share of romance stories with nary a question of whether our strong young good-looking hero would get the girl at the end or our young graceful beautiful heroine would get the guy (never mind any but the most flawless of heterosexual couplings), and there were stories with zombies or vampires or serial killers and haunted houses, and….

But you get the picture, right? I don’t have to continue to complicate the questionable syntax of that sentence to drive my point home, do I?

“Why would anyone want to write about real life,” a student recently asked, “when they could write fantasy?”

The student’s intention, I believe, was to proclaim “real life” boring and to denounce writing about it as lacking in imagination. At any rate, that student’s question made as little sense to me as my response would have to the student: “Why would anyone want to write about fantasy when they could write about real life?” Real life, as I experience it, is full of imaginative possibility. I love observing and listening to the interactions of ordinary human beings. Their gestures, their body language, their rhetorical dodges and stammers and haltingly spoken confessions thrill me. And seeing such people rendered as characters, made credible and convincing on the page, and watching them handle or not handle a small or large conflict and being taken along on a journey of change—yeah, all that thrills me too. And anyway, if a novice writer can rise to such challenges and create a story that is at once ordinary and extraordinary, made of a situation and characters we might actually encounter in waking/conscious life, then that writer can take that skill set and apply it to any sort of work of fiction.

But even as I lay down these laws, these holy words of literary fiction, I do so knowing full 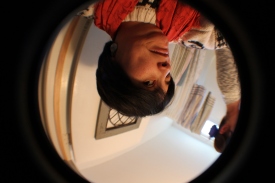 well that my bookshelves at home are full of much-loved, often-read novels like Toni Morrison’s Beloved, Gloria Naylor’s Mama Day, Kazuo Ishiguro’s Never Let Me Go and The Buried Giant, Octavia Butler’s Parable of the Sower and Parable of the Reaper. I recently read Ray Bradbury’s Fahrenheit 451 for the first time; I have George Orwell’s 1984 and Animal Farm, Aldous Huxley’s Brave New World, and Margaret Atwood’s The Handmaid’s Tale on order because the times we’re living in are ripe for such reading. And the fact is that some of my favorite short stories break the very rules I want my students to abide by. I think of Gabriel Garcia Marquez’s “A Very Old Man with Enormous Wings,” Joyce Carol Oates’s “EDickinson RepliLuxe,” and Robert Olen Butler’s “Jealous Husband Returns in Form of Parrot,” all of which have brought me to tears, more than once. I can include George Saunders “The Semplica-Girl Diaries,” Greg Hrbek’s “Sagittarius,” or a story I didn’t think I cared for when I first read it a few months ago but that hasn’t left my mind since, “Exit Zero” by Marie-Helene Bertino. According to the rules of my undergraduate fiction classroom, these stories would have been forbidden.

The rules I impose on my fiction-writing classes are there for very good reasons, but lately, every time I enforce them, I find myself wavering. The best science-fiction never loses its power or timeliness. Well-written speculative fiction and magical realism prove a constant source of wonder. Such works are no less thought-provoking just because they test the limits of credibility. If their worlds are convincingly designed, their characters complex, and their conflicts compelling, then the works rise to and sometimes exceed the standards of literary fiction I’m so intent on enforcing.

Anyway, my syllabus has one last bullet point on the list of content guidelines: “KNOW THE RULES and understand the reasoning behind them before you break them!” And if this semester’s fiction students can prove they know and understand the rules, I may very well encourage them to break them when they write their second story. The rules, you see, are a proving ground of sorts.

What are some of the rules of fiction you find worth upholding or breaking? Which rules do you find most constraining? Which ones have you broken most successfully?

*The title comes from William Wordsworth’s sonnet, “Nuns Fret Not at Their Convent’s Narrow Rooms,” which argues for the pleasure and satisfaction that can come from having structure and order and constraints to work within. Here’s a link: https://www.poetryfoundation.org/poems-and-poets/poems/detail/52299.