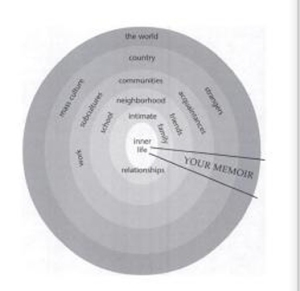 Lately John F. Kennedy’s death has been coming up.

On House of Cards the character Claire Underwood talked about how visiting the site where Kennedy was shot with her father influenced her decision to go into “public service” (a term I feel compelled to put into quotes because if you know the show and the character, the only person she is serving is herself and maybe her husband–but a discussion of that character and how the writers have developed her is for another post).

My former professor Sharon Warner wrote about her experience for her “About” page on her new website.

My friend Cindy Sylvester read a story, “Stairway to Heaven”  at our DimeStories 4th Year Anniversary Showcase celebration last Sunday.  One of the main characters was born on the day Kennedy was shot.

My friend Marisa’s mother went into labor the day Kennedy was shot. (Though she was actually born 5 days later.)

Judith Barrington includes an exercise in her book, Writing the Memoir: From Truth to Art that I recommend (here’s a pdf of pages 148 and 149):

Think of an event of historical or cultural importance that you remember (assassination of President Kennedy; the first moon landing; the end of the Berlin Wall; John Lennon’s death; an outstanding sporting event; the March on Washington; the Roe v. Wade decision; the AIDS epidemic; the Gulf War; etc). Write personally about how you witnessed or heard about that event and how it impacted you.

I haven’t gotten around to writing this exercise yet, but I did make a list of Big Events from my lifetime.  Make your own list or feel free to pick one from my list (or one of the ones Barrington mentions) and start writing. Even if you’re not writing memoir, think about how a character you’re working with experienced these events:

That’s just a handful of the disasters and tragedies I came up with (with a little help from my friend The Internet).

And that, my friends, is it for my March madness, aka “Fridays with Jenn”. Hope your March was fruitful!