Recently, a student told me about how a graduating senior claimed that she couldn’t be a writer until she read War And Peace. My first reaction was to roll my eyes and ask if he had read it. Apparently, he was only halfway through the book. Obviously the unnamed senior was wrong; people had been writing great works of literature for millennia before Tolstoy sat down to write the first words of his famous tome. However, I kept wondering about the senior and his reasons for making such a snobbish statement. Maybe he was trying to express how this book was revolutionizing his view of writing, and in his excitement made an overgeneralization. Maybe he was repeating something that a personal hero had said; I’ve known of tons of people claim that you can’t write “until you see the world,” “until you learn to depend on yourself,” “until you get your heart broken” and so on. And maybe, he was just a jerk who felt threatened by my student’s intelligence and talent and was trying to make himself feel better by putting her down. 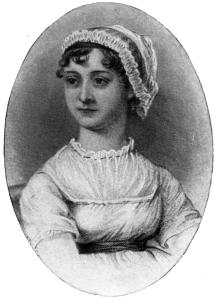 Jane Austen: someone else who never read War and Peace.

This is a common story. I’ve had a student who was brilliant and articulate but paralyzed herself with panic whenever she had to write because a teacher had said, “Please, don’t ever write again.” I’ve been in workshops where my fellow students’ critiques were something along the lines of “this subject matter isn’t worthy of a poem.” I’ve had strangers come up to me and tell me not to waste my time “reading that trash” (Jane Austin and Jack Kerouac). There are many creative writing teachers who forbid students from writing in genre or about a particular topic. All in all, we’re regularly told what we can’t write, and often we’re told that we’re not even writers. After a while we start telling ourselves that we’re not writers, which is ridiculous.

When I first started writing poetry, I thought all poems had to be about big emotions—emotions that start with capital letters—or about deep philosophical truths. In my first year of graduate school, I struggled to find subjects to write about. Everything fell flat. I finally turned in a fairy tale poem that I didn’t think very good (its subject matter was so very small). My professor told me that she thought I’d found my voice with that poem and suggested that I might write more. In other words, she gave me permission to write about fairy tales: fairy tales that most people think are only for children, fairy tales that aren’t well known, fairy tales that are silly and gruesome. Subconsciously, I’d been moving towards fairy tales, but consciously I’d been trying to stick with subject matter that was “appropriate for poetry.”

We’re always going to find someone who is more than willing to tell us that we’re not a writer. Someone who is more than happy to point out that what we’ve written doesn’t really count. The best thing that I’ve ever done was to ignore (or at least actively try to ignore) them. Today, I suggest you think about that subject matter, that genre, that form or lack of form, that thing that you’ve been avoiding writing about because it doesn’t count, and, of course, write about it. If it helps, know that you’re under no obligation to show it to anyone, as Bob advised in Monday’s post. Yet also remember, you don’t have to keep it hidden—if you’re proud of something that “breaks the rules” share it with the world.

4 thoughts on “Prove Them Wrong”