I’ve been struck by the fact that A Writer’s March coincides with the Lenten season, when Catholics all over give things up for Lent.  I’m only culturally Catholic, but every spring as I listen to people’s Lenten sacrifices, I toy with the idea of participating.  I never actually do.   But this year, I have thought of something I’d like to give up:   the things that stop me from writing.

Writing, like life, follows cycles, ebb and flow, fallow times and fertile.  One of the most valuable things I have learned over a somewhat long writing life is that there will be times I am not writing at all, and I don’t have to fear those times.  Writing will never vanish for good.  It will come back, often in a new and unexpected way.  Those seemingly fallow times are often what we need, a time of rest, when we may not seem to be doing much, but most likely, the seeds of the new are planted, getting ready to stir in spring.  Slow times are needed, and that’s not what I’m talking about giving up.

I’m talking about giving up the other kind of barriers.  The ones that stop you from writing because you’re thinking too much, and not about process, but about product.  Perhaps it’s your overly-critical editor that you’re not turning off, so you’re worrying about every word you write.  Stop it!  As all writers and teachers of writing know, the editing stage needs to come after the drafting stage, and letting the editor voice get the best of us can stop us from exploring new ideas.  So stop listening to Ms. Overly-Critical Editor’s voice when you’re drafting, and go for the churning-out-words drafting stage!

I know this can be difficult:  for years, I had a disdain for this kind of drafting.  Part fear, and part snobbery, I thought things like NaNoWriMo were just ridiculous:  try writing a novel in 30 days?  How good could it be?   What I was forgetting is that in the drafting stage, good isn’t the point.  Producing a lot of work is, and in December, NaNoWriMo writers can start to worry about the editing stage, but in November, the point is to get words on the page.  I decided to try NaNoWriMo when I was at a low point in my writing, and was trying to recapture a sense of play.  I tried it, and I was a convert:  sure, I wrote a lot of crap, but I also wrote a lot of good stuff, too, and more importantly, I had a lot of words I would have never written without it.  I even discovered a new style of drafting:  writing as discovery.  I didn’t have to have a plan–I could wing it, and often that took me into unexpected places.  (This may be an obvious discovery for novelists, but as someone who works primarily in poetry and short essays, it was eye-opening!)  I’ve “won” NaNoWriMo twice, and I still continue to work on both of the novels I produced.  (In fact, one is part of my Writer’s March project!)   So that’s one thing I suggest giving up for Writer’s March:  Banish Ms. Overly-Critical Editor!  Let her come back in April, but for now, words on the page!

There’s a related barrier I’ve encountered, which I’ll call Dr. Writing Biz.  Dr. Writing Biz is an editor too, one who is very concerned with product.  But Dr. Writing Biz is also about prestige:  what journal will I get this piece in?  Is it good enough?  Can I send this off to a big agent, big publisher, big prize?  How will this look on my CV?   Dr. Writing Biz is all about writing for someone else, whether that someone else be a prize committee, an agent or editor (perhaps one you don’t even have yet), a dissertation director, a workshop, whatever.  Dr. Writing Biz can stop you cold, too, because he’ll say “oh, that piece will never get in journal x.”  These kinds of conversations before you’ve even written anything can be deadly.  I personally find the business of writing (and thus Dr. Writing Biz) so awful that it will sometimes freeze me up before I write anything at all. (No, the NaNoWriMo novel I’m writing is NOT going to be literary fiction, and what will I do with that?  Answer:  keep writing it.  Finish it, and then worry about what to do with it!)

Part of the problem with Dr. Writing Biz is that for him, writing is all about prestige and jockeying for position.  Dr. Writing Biz encourages us to compete, to compare ourselves to others, which is not useful.  There will always be writers who are better and worse than us, and that’s fine.  In fact, it’s not our business to worry about that.  What is our business is to get words on the page, and not worry, in the drafting stage, about what to do with them.  For me, a writer and academic who often becomes paralyzed by Dr. Writing Biz’s critical gaze, what has been most valuable is to remind myself WHY I wrote in the first place.  In my earliest and purest encounters with writing, words were simply play.  I did it because it was fun, because I loved to read and loved to write.  Later, I wrote to express things that were important to me:  often out of a sense of outrage or a desire for justice.  Later still, I wrote out of a desire to understand my own experiences and share those experiences with others.  All are valuable.  And none have to do with winning prizes or getting big publications.  It’s not wrong to want those things,  but thinking about them just made me beat myself up when I wasn’t getting them, or made me feel envious, and did nothing for my writing.  So I’ve kicked out Dr. Writing Biz too (and I’m not letting him come back!)

Zora says “Are we having fun yet?”

There are a dozen other things to get rid of for March:  the Thirteen-toed Sloth of Procrastination (oh, wow, write?  No, I better wash the dishes, take the dog for a walk, check Facebook, take a shower, do my taxes);  the Pernicious Pit of Cumulative Despair (Oh, I didn’t write for three days, might as well give up the whole thing),  and her cousin the Sad and Stubborn Can’t  (this scene isn’t going well, so obviously I can’t really write at all);  the Uninspired Auntie (I can’t think of anything to write.  I don’t have any ideas.  Might as well give up).  I’m sure you can think of some of your own.

But for now, banish them all.  What I’m suggesting for Writer’s March is just getting words on the page.  Don’t edit them yet.  Just write.   Give yourself exercises.  Give yourself prompts, and follow them, daily–worry about what you’ll do with these words later.  Practice free writing:  here’s your prompt (see some below), write for 10 minutes, or 20 minutes, or 60.  Go!  Practice play:  be silly, imaginative, fun.  Let the words flow! 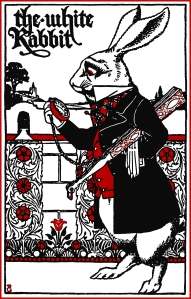 Included are a couple of my favorite exercises, which can be used with any genre:

* Go somewhere different to write.  When you get there, take out the bag you brought with you, your backpack, purse, briefcase.  (Travel lightly? Only have a wallet with you?  Ok, what’s in there?)  Take everything out of that bag and spread it on the table in front of you.  Make a list of everything you brought with you.  Be detailed and imaginative in this list:  don’t just write that you have a pen, but you might say a blue pen with the cap gnawed like a dog’s bone.  When you get done with listing, refashion it to create a portrait of the person who owns all these things.  You can add things that you didn’t really have with you if you like. You can also do this by making a list of things in a different space:  a room, a car, a cupboard.  Think of The Things They Carried, and how that list of things carried by the soldiers tells us so much about them.

*A writing prompt:  write in the voice of a character not your own.  Choose a character from a fairy tale, from myth, from movies or popular culture.  Tell a side of the tale not usually told.  Have fun with it!  For inspiration, look at Angela Carter’s very adult retellings of fairy tales, or Anne Sexton’s fairy tale poems.

*A bigger project:  taking a piece through transformation.  This is a way to re-see something.  Take a stuck piece and rewrite it in a new genre.  Make prose into poetry and vice versa.  Then, transform it into another media entirely.  Draw it, collage it, make a diorama out of it (remember those?  Take a shoebox and make a three-dimensional representation of it).  Then take it back to its original genre.  How is it different?  What did you let go of and add in the different transformations and how can you use those? (This last part might be for your editing stage!)

4 thoughts on “What I’m Giving Up for Lent”