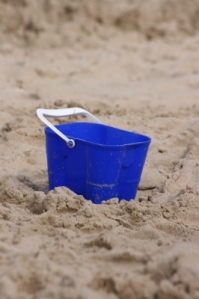 I’m not very good at waiting, and I always talk too much. So, on one hand, it’s pretty easy for me to fill up space when I write.

On the other hand, though, it’s hard to build sandcastles out of mud, even if mud and sand basically weigh the same amount, as far as I can tell. I think it’s something to do with air, or granularity, or, maybe seawater?

But what I’m saying is, I write a lot of crap.

My computer is full of arbitrarily named file folders and all of these folders are stuffed with poems, poem ideas, and unrelated disembodied poem fingers. I have done Writer’s March since it started, and every year I have the same goal: to write a poem per day for the month, and every year I meet my goal, because I’m also incredibly uptight about getting things done. But – and this is not specific to Writer’s March – often I don’t end up with a lot that I like. This is because I want everything to just be easy. And it’s really pretty easy to toss something up into Word and say I’m done for the day.

But I end up with much better work if I let my work sit.

I realize that when dust collects for a few days on a poem that I’ve written, it gains some added nuance and grit and texture. I get to know it better and it tells me what it needs, and whether it’s viable.

For me, writing poetry is not like doing a triple axel in the Olympics. I can’t just leap with no warning with the pulse of the music in my throat and throw down ice chips in my wake like broken stars. Even Olympic figure skaters can’t do that, I don’t think. They leap effortlessly because they’ve practiced and trained and fallen for years. They’ve sat there with their bodies and their work and haven’t expected things to just work out.

I need to do that too. This is my long-winded version of the Serenity Prayer, I guess.

So this year, I’m going to stretch a bit.

I’m going to write every day and see what happens, but then I’m going to come back to it the next day like a crime-scene voyeur and see if it has fallen through. And if it has, I’m going to fix it. I know I have to make myself do this if I ever want to get better, and I do, in fact, want to get better. I think we all do, right? Otherwise it would be easier to binge-watch Revenge all day.

But the third season isn’t on Netflix yet. And anyway, what I really want is to be a better writer.

So how about you? Are you changing things up this year? What is working for you?

4 thoughts on “Sandcastles of Crap”