You may recall last year Sam shared a video of a talk by Kurt Vonnegut on the shape of plot. If you’re new to The March or if you want to refresh your memory, you might want to check it out here. Don’t mind me, I’ll wait. Now, I enjoyed the video immensely and suspect that Vonnegut is pulling our collective leg. However, there was something about the idea of writing stories to fit specific shapes that I found deeply unsettling.

I’m a firm believer that stories should tell themselves, that while broad structures could be useful in giving guideposts to a writer who is lost in a piece, but if the writing is going smoothly it should be allowed to explore. After all, what’s the point of taking a road trip if you don’t get off the Interstate once in a while?

I thought of doing a sarcastic response to this video by charting some of my own work. (Shameless plug in ten… nine…) “What did he plot?” you’re probably thinking. Well, I’m glad you asked. I decided to plot the first section from my book of short plays. Ok, was that too shameless? Perhaps, but it is pertinent. At no point when I was writing any of these plays was I thinking of structure, and yet each one is—to me, anyways—very satisfying.

At first I thought I’d just draw a random mess of lines on a page and call it a plotting of that section of plays, but struck by a sudden and inexplicable bout of honesty I decided to do my best to accurately chart each one of the 33 short plays according to Vonnegut’s grid. I mean, what if I’ve so internalized the “boy gets girl” shape or the “man in a hole” shape that I’m writing them without even thinking of it? What if I’d charted out my plays and found them clustering around those few tried-and-true curves? It would seem to invalidate my argument, don’t you think? I sat down with the manuscript and three different colors of pens. Here’s what happened:

I got a mess 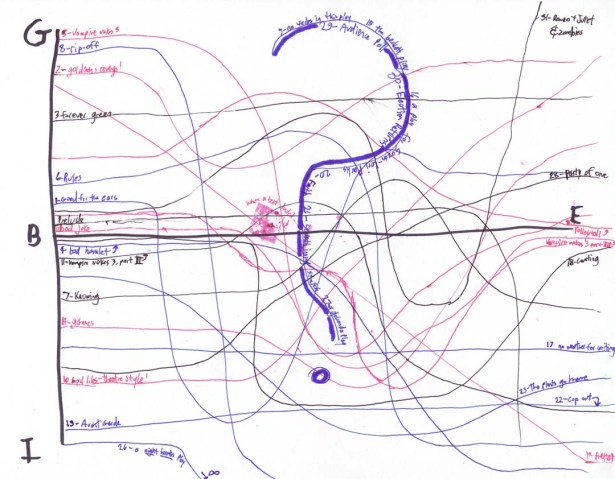 A much bigger mess, in fact, than I would have had if I’d just drawn a bunch of lines at random, as I’d initially intended. Some lines don’t curve at all, others waiver because I wasn’t sure whether what happens could be described as good or ill fortune, and then there’s that great big question mark in the middle, for that small number of plays that have moved so far from any traditional notion of plot that I couldn’t even figure out where to put them in this graph. For example, what kind of curve do you set for a play which contains absolutely no verbs whatsoever?

And now, in the category of “what’s a year between friends…” 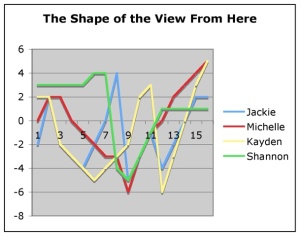 A few of our Marchers shared their own story shapes last year and now—with their kind permission—I’m pleased to share them with you as well. Fearless leader Sam found it difficult to find any one shape for her novel-in-progress because it is told through four main characters, and their individual ups and downs do not necessarily coincide. She eventually decided to plot the ups and downs in an Excel spreadsheet just to keep everything straight, leading to this nifty graph. 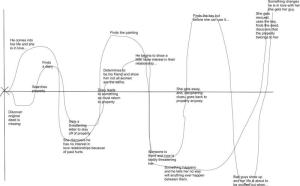 Another Marcher, Catherine Gurganus, sent a plot of her novel as well, and interestingly enough she also found it necessary to plot multiple lines for the shape of her story. One line represents a mystery story, the other represents a romance, and the two lines follow similar but definitely not identical trajectories.