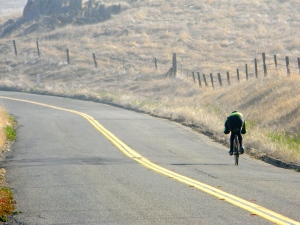 This is not a race.  After writing for 18 out of my intended 24 hours, this is the conclusion I came to right before I decided to go to sleep.

I woke this morning to the sight of Randi glaring at me from her side of the bed.  At three thirty this morning, I  told her I was calling it a night.  I had written for 18 hours: pure, focused, and (mostly) blissful 18 hours of work, pausing now and again  for the occasional walk, snack, meal, glass of water.  Randi was upstairs working steadily; I was downstairs writing in our covered porch.  At three thirty, I weighed my options:  I could drink a 5-hour energy drink and keep going, or I could go to sleep.  I had accomplished a huge chunk of the work I set forth to do.  I was revising the final two chapters of the book and I was exhausted, both mentally and physically.  I had made it through 250 pages of text, and here at the climax, I was out of steam.

All day, I kept confronting my fear of finishing (every three hours, the need to distract myself from the task would re-emerge), and so I checked in.  Was I stopping because I was afraid of the end?  If I kept working for the next 6 hours, would it be to the betterment of my project?  If I did get sick, would that keep me from working next week?  Were all of these questions simply excuses to call it a night?  I was satisfied with my answers: NO, I wasn’t afraid of the end, I was mentally drained; and so NO, it was not in the best interest of my project to continue; and YES, getting sick was not a good option at this point in time; and MAYBE these were excuses, but what did it matter?  I was satisfied with the work I had done.  I have never felt so good about my manuscript.  I I set my alarm for the following morning, intending to finish the 24-hour goal then. I went to sleep with a clean conscience.

If you run marathons, you probably understand why Randi was glaring at me.  After I had gone to sleep, she worked another 4 hours and then, irritated that I’d abandoned her, stopped her own push with only 1.5 hours left to go.  She then commenced to lay in bed, staring at the ceiling and glaring until I woke two hours later.  Before you judge her for getting mad at me (or judge me for not finishing the night with her), you should understand that Randi has done things like this before–she has run marathons, she finished NaNoWriMo, she embarks on crazy impossible projects and pushes herself to the extreme all the time.  For her, 18 hours of writing is nothing if not for the 24.  Remember, this crazy idea was hers after all?  And when we woke this morning, she couldn’t understand how I could give up like that.  Right at the end, she said.  We were so close!

It occurred to us, then, that we saw the 24-hour writing finale in two totally different ways.  For Randi, success was about recognizing your limits and then pushing far, far, far past them.  A key part of this was seeing something through to the end.  To be successful and tired the next day was okay, it was part of the excitement.  But to be unsuccessful and tired the next day?  That was not okay.  For her, to go to sleep before the 24-hour mark was was the equivalent of quitting a marathon when you were a mile from the end.  In that way: all that work?  Wasted.  For me, someone who has never run a marathon (or completed NaNoWriMo or some other crazy feat), twenty-four hours of writing in a single weekend was a huge accomplishment, and writing for 18 hours straight in a day went above and beyond what I thought I was capable of.  Not so long ago, I thought it would be impossible to write 30 hours in a  week, and now, my world has been cracked open.  A three-hour writing stint–from here on out, that should be a walk in the park!

This has me thinking about the Writer’s March project, which makes for a fitting final post here on Day 31.  I think it is important to remember this: Writer’s March is not a race.  What does that mean?  For me, it means that you cannot fail at Writer’s March.  It means that success is marked not by whether or not you met your goals, but by whether or not you feel good about the work you have done regardless of what you set out to do.  Why?  Because if you feel satisfied with the work you’ve done, you are probably more likely to do more of it.

In our numbers-oriented world, we always want to quantify success.  If Goal A is 15 min/day then success is achieved when Subject A completes Goal A.  Subject A can now move on to Goal B.  But I don’t think  this creative process has to work that way.  What makes something successful for us is a different thing entirely than what makes something successful for science or athletics (though I do understand that they are related).  I am not arguing here that goals are not important.  That would defeat the entire point of this blog.  Clearly, if we want to finish our books or write our stories or learn our craft, setting goals will help us get there. I am simply saying that meeting your goals is, for me, only part of this picture.  The rest involves learning what you are capable of and, in the process, creating space in your life for words.

By now, you know: writing is unpredictable and unwieldy.  A short story can become a novel, an essay can become a book, a scene can become a poem.  How do we quantify that shift in pages or time?  And so, as you write onward, don’t forget that goals, like projects, should also be flexible.  A goal that doesn’t change over time is no longer a goal, but a stubborn pursuit.  As long as you can recognize that you aren’t making excuses and are honest with yourself, then you should be fair with yourself and allow yourself to revise your goals accordingly.  As you think about writing in the next month, the next year, the next decade–and I hope you will–keep this in mind.  Take stock of what happened this past month.  Adjust.  Revise.  Keep going.

One way you might think about success in Writer’s March:

Randi feels it is important that I point out that we came to this conclusion together.  We woke, made breakfast, drank coffee, and I convinced her that it was okay to finish her last hour and a half at 9:30 this morning, which she did, plus some more.  Knowing Randi, there will be even more after that.  Goal Revised.  Goal Accomplished.

Thank you friends, for writing with me this month.  I look forward to making the trek again together next year.

What did you accomplish this month?

Your answers will be added to the official 2013 Challengers page.