Writing: A safe place for the Triskaidekaphobics (is this a stretch? probably)

The Apollo 13 mission may have made it safely back to earth, but it wasn’t without overcoming major obstacles.  The superstitious types were shaking their heads: with a name like that, the mission was doomed from the start. And, as if that ominous name wasn’t enough, NASA seemed to be taunting fate: the spaceship launched at 13:13 from pad 39 (13×3).  On top of that, astronaut sleeping arrangements were scheduled for 13 minutes after the hour.  With so much 13 in play, it’s wonder the crew made it back alive!

The superstitious 13 has caused a number of omissions:

The 13 has struck such fear in people that the state of anxiety has number even earned itself a name: Triskaidekaphobia.  Today, on this 13th of March, don’t let the unlucky win.  To help you hunker down, here are three writing methods aimed to help you barrel through (I was going to give you 13, but that seemed a bit much…)

#1: TYPE INTO THE VOID (A writing prompt from Danner)

Sit at your computer. Turn the screen off. Get into the head of your perspective character. Type into the emptiness without worrying about editing, typos, or anything else. Just let yourself speak with your fingers into the computer for an hour. 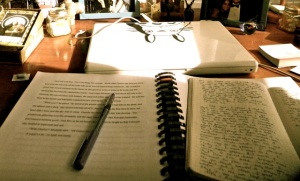 #2: RETYPE YOUR REVISION (A writing prompt from Nari)

Print a hard copy of our draft.  Read it through and edit the paper copy.  Then, sit at your computer, open a blank word document, and retype the draft in its entirety.

Last year, Jennifer offered this same advice in a post titled “Retyping your Revision.” This year, Nari send the same idea in when she officially joined the March.  As Nari explains, one day, “I found myself at a coffee shop without my flash drive, and since I had a hard copy with hand edits, I decided to retype it. I started to do so (and still am) because I’ve found quite a bit to refine. Retyping the sentences that I’d read on my computer monitor so many times before has forced me to rethink them and, most importantly, really listen to them. This is a great way to work with a draft when you feel it’s almost there, just not quite there yet.”

#3: HAND-WRITE THE SCENE TWICE (A writing prompt from Sam)

When working with a particularly troubling scene, write the pages by hand.  Then, write the scene by hand a second time.  Then, type the scene into a word document.

Lately, this has been my method of choice.  I’ve found this process to be particularly helpful when writing problematic scenes (particularly climactic moments or difficult conversations).  When I write the first draft of a scene, I find myself putting in some fillers (as in “yadda, yadda, yadda, something will happen here” or “this scene is still not quite right.”)  Or, more often than not, I’ll be so compelled by the scene that I’ll skip exposition and narrow in on the dialogue (during these moments I feel like I, the writer, am simply trying to keep up with the characters).  When I hand-write the scene the second time, I focus on filling in these moments and playing with my sentences.  The second hand writing is important because it doesn’t allow me to become impatient.  I have to take the moment slow.  By the time I type the scene, I’ve found that I can type quickly, ironing out the language and punctuation but usually able to leave the scene in tact.

What are you waiting for?  Set your timers (for 13 minutes!) and go!

Information about the Number 13 were taken from “Number 13: The Legends, Myths, and Facts”.  Click the link to learn more.

4 thoughts on “Day 13: Triskaidekaphobia, Don’t Let Fear Keep You Away”