Yesterday, my good friend and fellow Writer’s March challenger, Melanie Unruh successfully defended her disseration and passed (with distinction!).  For those who don’t know the process, at the end of your MFA, you usually have to turn in your manuscript to a committee of professors/writers, and then formally “defend” it.

I always love watching dissertation defenses.  When I had read about them, I had thought that they would be a much more daunting experience.  I pictured tryouts for Juliard, a panel of stoic faced people sitting at a table and firing questions at the writer in an attempt to knock them down.  Probably the furthest thing from what actually happens. The writer gives a brief reading of their work and then the committee members ask he or she questions about his or her manuscript.  In the end–at least in our program–the dissertation feels like one giang love fest. 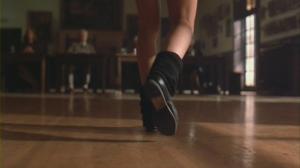 You can thank the movie Flashdance for the image I had in my head of what a dissertation defense looked like...

Melanie’s went particularly well.  She’s completed the third draft of a complicated novel with dual story lines, two time periods, a treasure trove’s worth of family secrets, and it faces, head on, the topic of abortion.  The conversation about her work was engaged and encouraging and as I sat there, on several occasions, I had this giant need to burst into tears.  I was so happy for her.

Melanie and I started this program four years, and I don’t even think we are the same people we were when we arrived here.  Yes, people change over a four year period, but the last four years have been more than that.  They’ve been transformative.  And yesterday it occurred to me that here I am, very close to the end of it all. 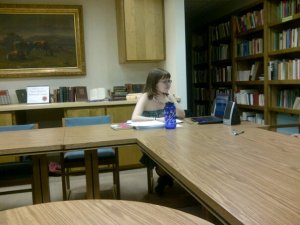 Here's Melanie at her defense. One of her committee members was participating via SKYPE. Hence her computer. What you can't see in the picture are the handful of people sitting behind the camera

As writers, I think its natural for us to be prone to jealousy.  Another writer getting published or finishing something can make us feel insecure or angry or full of disbelief.  Sometimes we might feel defeated–will I be able to do that?  Or we might feel extra pressure– I better make mine as good as that.  Or we might doubt ourselves–as I often, often do.  Part of what made yesterday so wonderful was that the room was only full of love and admiration for the work Melanie had done.  It was a beautiful example of writers supporting other writers.  Of all the writers I know, she is the one who works the hardest, day after day, draft after draft, page after page, and it was lovely to see her honored for that.

Today, I’m writing because Melanie inspires me.  Because the end of things are also the beginning of things.  Because the more words that are in the world, the better the world will be.  Because this is what I do.  I write.  We write.

Thanks Melanie.  Today is for you.

One thought on “Writers Supporting Other Writers”